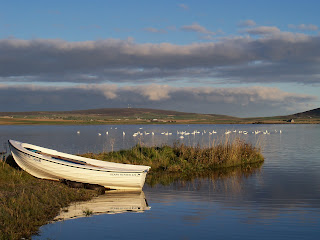 Once Bride was well known in these lands
as the Great Goddess, ruling the land and all the seasons. 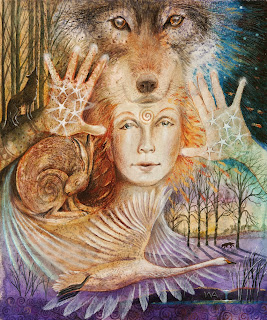 Wendy Andrews
BRIGHDE
GODDESS AND SAINT
Brighde is the ancient Goddess of Brigit’s Isles, where She is Bridie, Bride, Brid, Bree, Brue, Brigit, Brigid and Bridget, Lady of Fire, of the Sun and Moon, of the Springs and Wells, of the Four Directions, the Divine Midwife of the Soul, Bride of the Isles, Bride of the Fair Palms, Mary of the Gael. As Goddess of the land She gives Her name to the ancient land of Brigantia and to our tutelary (guardian) Goddess Britannia.

Once Bride was well known in these lands as the Great Goddess, ruling the land and all the seasons. She is the Wheel, Her energy is tangible through the whole year. In every season, in every element, in every phase in our lives She inspires and transforms us.
In Glastonbury we recognise Brighde in the landscape as Her Sacred Swan stretching Her long neck along Wearyall Hill and spreading Her wings over the Glastonbury town hills. She flows in the waters of the sacred wells and the river Brue, which is called after Her. But foremost She is revered on Brides Mound which is part of The Beckery. 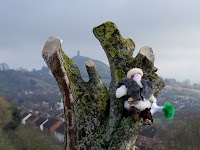 MARION VAN EUPEN
Marion van Eupen is a highly devoted Priestess of the Goddess, a wise woman and a warm, inspiring and loving teacher. She has many years of spiritual training and experience. Marion has been trained in the tradition of Avalon. 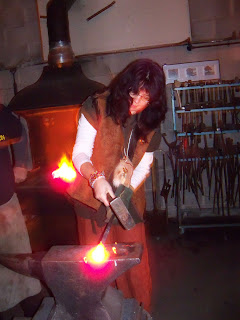 Starting her path with the Lady in the land where she was born, the Low Lands at the sea, she know lives in the land of Brigantia who called her some time ago to live on the sacred ground of Bride’s Mound, Tor and Chalice Well.

Go to www.goddesstemple.co.uk for a full portrait of Marion and the program.
﻿